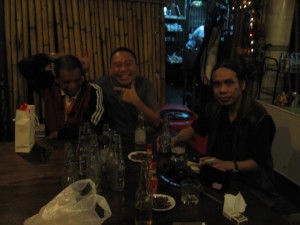 A bunch of drinkers who refuse to be identified as Jonathan Perez (left) and Alexander T. Magno (right) at a now-defunct watering hole in Quezon City.

Another idea from Rory Sutherland: the U.K. guidelines for patients with mild problems coming from alcohol are to reduce the daily consumption to under a certain number of grams of alcohol per END_OF_DOCUMENT_TOKEN_TO_BE_REPLACED

Farmers are still hard-pressed to regain ownership of a stake in San Miguel Corp., whose flagship product is its eponymous beer. (File photo by Nonie Reyes)

Details are sketchy but at five in the morning of a weekday in the mid-seventies — a year or two or so after Ferdinand Marcos declared martial law — a newspaper publisher received a phone call in his office.

It was from a powerful Cabinet minister.

The publisher was reportedly taken aback.

He didn’t usually get calls at five in the morning.

Moreover, he never thought Malacañang bothered enough to know about his schedule, let alone his whereabouts. (It was common knowledge however that he could be found at his office at around that time.)

But then again, this was just par for the course.

After all, the Philippines was under military rule.

The press was muzzled, activists were initimidated and/or murdered, and activities of known Marcos critics were monitored.

As a matter of routine, newspaper publishers also received calls from government officials especially when they planned to cover and/or write stories not exactly flattering to the Marcos regime.

Which was exactly what happened that morning.

The minister asked the publisher to abandon the newspaper’s plan to assign a special reports team to write about the coco levy controversy.

It was a scheme successfully hatched by Marcos crony Eduardo “Danding” M. Cojuangco Jr., which was later exposed by Virgilio M. David, a former general.

In his study, David said that the levy (a kind of tax) paid by coconut farmers whenever they sold copra (dried coconut meat) in the 1970s was funneled into various companies owned by Cojuangco, the uncle of current Philippine President Benigno “Noynoy” C. Aquino III.

Instead of being used for the industry’s development, the levy went to various private companies headed by Cojuangco, among other cronies.

In effect, from a public fund, the levy became a private asset controlled by Boss Danding.

And that’s when the fun began — or at least for Cojuangco and the other cronies.

The coco levy funds were used to buy a total of 47 percent of San Miguel Corp. in the mid-eighties.

The funds came from various companies owned and controlled by Cojuangco et. al., the very same corporations into which the coco levy was funneled.

Total shares in San Miguel bought by the coco levy funds are divided into two — 20 percent under Cojuangco himself and 27 percent under the so-called CIIF (Coconut Industry Investment Fund) companies, also owned and controlled by the Boss.

In 1986, when the Marcoses fled and most of their assets were sequestered, the levy was estimated at P9.65 billion, according to the Commission on Audit, which examined the records. That amount is worth P42.48 billion* now, which, give or take a few billion, is roughly the yearly budget of the Department of Agriculture.

A little more than a decade after fleeing the country, Cojuangco was able to come back and later regain leadership at San Miguel Corp.

In December 2001, the Supreme Court ruled with finality that the 27 percent shares in San Miguel — comprising three board seats in the corporation — are public. These funds are currently held in trust by the government — through the Presidential Commission on Good Government — until such time that these can be properly turned over to the farmers (perhaps through a special government facility).

This was followed by a May 2004 decision from the Sandiganbayan, the Philippines’ anti-graft court, which said that 27 percent of San Miguel shares — also known as the CIIF block — were acquired using coco levy funds.

But as coconut farmers and their government were preparing for the next step in recovering the levy, things got screwed up again.

In September 2009, more than 25 years after the first coco levy was collected, the Supreme Court — with members mostly appointed by ex-president Gloria Macapagal Arroyo — approved the conversion of the 27 percent San Miguel shares to preferred from common.

What was the effect of the conversion?

It allowed coconut farmers to lose their claim over the 27 percent San Miguel shares that were acquired using money they forked out.

While preferred shares theoretically earn more (its dividends are higher than common shares) and its owners are first to be paid (in case the company goes bankrupt), the conversion also allows the company to buy back the shares after a certain period (i.e., five years).

Once the shares are bought back by San Miguel, the farmers will no longer have shares to speak of.

As a result, the farmers would have been screwed more than once.

The farmers paid a levy, the levy went to Marcos cronies, Marcos cronies used the levy to buy San Miguel shares, and now the farmers are expected to lose the claim over the same shares which were acquired using their money in the first place.

So it’s back to square one. It’s as if the Marcoses never left and EDSA I never took place.

In the meantime, let’s go back to three decades ago when the Cabinet minister made that call to the newspaper publisher about the coco levy scandal.

Did the publisher — known for being fair and independent — give in to pressure?

I have no idea.

Question now is, as things stand, would the publisher’s decision have mattered one way or the other?

From the Give Credit Where It is Due Dept. This blog entry was prompted after I read a letter to the editor written by Joey Faustino published by the Philippine Daily Inquirer. Faustino, the head of a coconut farmers’ group, reiterated that the share conversion was destrimental to farmers. [See: Faustino’s letter to the editor]

*These are my personal estimates, using Measuring Worth, which helps determine the current value of a US dollar compared to previous periods, and International Economics, which shows past Philippine peso-US dollar exchange rates. Measuring Worth shows many other ways to determine — for the lack of a better term — value.

Unfortunately, certain cold beverages do not fall under the category of victuals, which explains why he remains awake at this unearthly hour

And so, he continues to Tweet, formulating thoughts into 140 character configurations while warding off the threats posed by sheer thirst.

While Tweeting, he discovers that Oprah Winfrey will end her show in September 2011 — a development best appreciated while nursing a beer.

The failed strategy is further complicated by tweet from @Kid_Kilatis who mentions Frank Sinatra, bringing images of bars, saloons, women

Situation getting out of hand, protagonist mutters to himself, left hand clutching neck. Will tomorrow night be any different than this one?

Story now ends as protagonist moves on to other plans, including updating his Facebook status as he looks forward to tomorrow night’s beer.

(Certain punctuation regulations were relaxed to comply with Twitter’s 140 character limitation. Some entries didn’t have periods, for instance. Similar attempts in the future will absolutely do away with these oversights. Cropped photo on the top right was taken during the September 2009 launch of San Miguel Brewery Inc.’s Oktoberfest, which was attended by, among others, the Oktobabes, a group of lovely Brazilian women.)

NO question about it: Romeo “Omi” C. Royandoyan has done a lot to advance the cause of the Filipino coconut farmer.
Currently the executive director of Centro Saka Inc. (CSI), a non-government group which, among others, undertakes rural development studies, Royandoyan was among the farmer-representatives appointed to the board of the United Coconut Planters Bank (UCPB), thanks to court decisions which ruled that the lender was acquired using funds collected from coconut farmers.
Since farmers technically owned the bank—assets bought using their funds were therefore theirs—they were entitled to representation at the bank’s board, which, in turn, was made possible by the courts and the Presidential Commission on Good Government under the late great Haydee Yorac, shortly after Gloria Macapagal-Arroyo was swept to power in January 2001.
Although Royandoyan, together with fellow farmer rep Jose Ma. “Joey” Faustino, was later removed from the board—presidents are entitled to change their minds especially regarding Marcos cronies—his commitment has never wavered.
To this day, Royandoyan, Faustino, former general Virgilio David (who was brave enough to expose the coco levy scam during the Marcos dictatorship), and many others remain committed to see that the funds collected from farmers are used for their benefit.
After all, coconut farmers have suffered more than enough.
Besides being forced to pay for heavy levies which amounted to P9.6 billion (as of a 1986 audit), coconut farmers have never benefitted from these taxes.
Instead, through a series of complex arrangements which transferred public funds for private ownership, the levies were unlawfully used by Marcos crony Eduardo “Danding” C. Cojuangco Jr. to buy a bank (i. e. UCPB) and acquire a controlling stake—anywhere from 47 to 51 percent—in San Miguel Corporation (SMC), the Philippines’ largest food company.
Although coconut farmers have won significant legal victories against Cojuangco—in May 2007, the courts allowed the partial sale of UCPB and SMC shares, proceeds of which will be held in trust by the government for the farmers—they still remain uncertain when their protracted struggle will end.
Like any other oppressed, disenfranchised, and marginalized group in this country, coconut farmers and their interests are easily ignored, no thanks to a powerful, influential, and moneyed class whose intentions almost always run contrary to the greater good.
This is probably why Royandoyan decided to author a book about the contentious, complicated coconut levy issue: to let the whole world know about what is perhaps one of the biggest scams in Philippine history, perpetrated by one of the most powerful and influential Marcos cronies.
Entitled “Long and Tortuous Road to Coconut Levy Recovery,” the book, published this year, is the very first volume in what appears to be the CSI’s Rural Development Review series.
However, despite its numerous potentials for dramatic storytelling, the book reads like an academic paper.
Which is not flattering at all.
Nor does it help the coconut farmers’ cause.
Had it been written with the regular reader in mind—regular reader here defined as someone who knows absolutely nothing about the issue—the book could have had more chances of generating support for the farmers. In turn, more support could mean more pressure for government to set things straight, underscoring once more the power of the written word; a power properly harnessed by those who sought to change the world.
Unfortunately, of the book’s 184 pages, only a handful of passages
can be considered as powerful.
Rife with legalese, punctuated by vague sentences, the book’s text drastically lacks in narrative what it offers in the way of substance.
Which is unfortunate.
Instead of interpreting, laymanizing, and contextualizing the many legal and technical concepts surrounding the coconut levy cases—there are eight of them in all, one of which involves an attempt at acquiring a stake in Pepsi Cola—the book in its own obtuse way merely replicates whatever the courts have said, possibly contributing to the readers’ confusion.
Nevertheless, Royandoyan’s book—and CSI’s efforts to such work publicly available—represents an important step towards documenting what may very well be one of the largest crimes in Philippine history.