I do not think I am reasonable enough to avoid getting angry when a discourteous driver blows his horn at me for being one nanosecond late after a traffic light turns green. I am fully aware that such anger is self-destructive and offers no benefit, and that if I were to develop anger for every idiot around me doing something of the sort, I would be long dead. END_OF_DOCUMENT_TOKEN_TO_BE_REPLACED 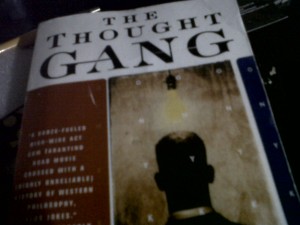 As my hands were cuffed behind my back, and I had a zet at the footwear of my arresting officers, I couldn’t help hailing Nietzsche’s dictum, what does not kill me makes me stronger. One could add that what doesn’t kill you can be extremely uncomfortable and can give you a very nasty cold. I sneezed with no hands and discharged some nose marrow across the short distance between my nostrils and the gleaming footwear of the detective in charge of the operation, where it spread-eagled and made itself at home.
The trouble with Nietzche—who in any case never prescribed instructions regarding conduct while being hand-cuffed on chilly floors in undignified circumstances—is that you can never be sure when he’s doing some levity or not.
The Metropolitan Police had the same problem with me. They were hugely unconvinced by my responses to their questioning.

— from The Thought Gang by Tibor Fischer, named by Granta Magazine as one of the best British novelists under 40 in 1994

Cover of Antifragile: Things That Gain From Disorder

The fragilista belongs to that category of persons who are usually in suit and tie, often on Fridays; he faces your jokes with icy solemnity, and tends to develop back problems early in life from sitting at a desk, riding airplanes, and studying newspapers. He is often involved in a END_OF_DOCUMENT_TOKEN_TO_BE_REPLACED

“You go to bed, wrap up warm, and drink a bottle of scotch. Technically it’s meant to be half a bottle, but I wanted to make absolutely sure. I cancelled all calls, put the Don’t-Disturb docket on the latch – and I was sleeping like a baby well before ten.”

“While many programs bolster self-esteem and promote good cheer — it can be fun, after all, to pelt the boss with paint — most take place away from the office and all the frustrations and power struggles that go with it. As a result, critics say, they tend to create an artificial, almost vacation-like atmosphere that has little relevance in the real corporate world.”

— From Motivational Missteps by Abby Ellin in the New York Times Management Reader: Hot Ideas and Best Practices from the New World of Business

“There are other reasons, too, for proposing the novel as the crucial art form of what I can no longer avoid calling the post-modern age. For one thing, literature is the art least subject to external control, because it is made in private. The act of making it requires only one person, one pen, one room, some paper. (Even the room is not absolutely essential). Literature is the most low-technology of the art forms. It requires neither a stage nor a screen. It calls for no interpreters, no actors, producers, camera crews, costumiers, musicians. It does not even require the traditional apparatus of publishing, as the long running success of samizdat literature demonstrates. The [Michel] Foucault essay [What is an author?] suggests that literature is as much at risk from the enveloping, smothering forces of the market economy, which reduces books to mere products. The danger is real, and I do not want to seem to be minimizing it. But the truth is that of all the forms, literature can still be the most free. The more money a piece of work costs, the easier it is to control. Film, the most expensive of art forms, is also the least subversive. This is why, although Carlos Fuentes cites the work of film-makers like [Luis] Buñuel, [Ingmar] Bergman, and [Federico] Fellini as instances of successful secular revolts into the territory of the sacred, I continue to believe in the greater possibilities of the novel. Its singularity is its best protection.”

— From “Is Nothing Sacred?” written by Salman Rushdie and delivered by Harold Pinter as part of the Herbert Read Memorial Lecture at the Institute of Contemporary Arts in London in February 1990 and published by Granta both as a pamphlet that carried the same title and in its 31st issue.

“It all seems long ago now. And it was. It was so long ago, in fact, that my grandparents had a crank telephone, the kind that hung on the wall and had a handle you turned and said: ‘Mabel, get me Gladys Scribbage. I want to ask her how she makes her ‘Frosted Flakes ‘n’ Cheez-Whizz Party Nuggets.’ Everybody listened in. My grandmother often listened in when things were slow around the house, covering the mouthpiece with a hand and relaying to the rest of the room vivid accounts of colonic irrigations, prolapsed wombs, husbands who ran off to Burlington with the barmaid from Vern’s Uptown Tavern and Supper Club, and other crises of small-town life. We always had to maintain the strictest silence during these sessions. I could never entirely understand why because if things got really juicy my grandmother would often butt in. ‘Well, I think Merle’s a real skunk,’ she would say. ‘Yes, that’s right, it’s Maude Bryson here, and I just want to say that I think he’s an absolute stinker to do that to poor Pearl. And I’ll tell you something else, Mabel, you know you could get those support bras a dollar cheaper in Columbus Junction.’ In about 1962 the telephone company came and put a normal phone without a party-line in my grandmother’s house, possibly at the request of the rest of the town. It drove a hole right through her life from which she never entirely recovered.”

— From More Fat Girls in Des Moines written by Bill Bryson and published in Granta 26, the Travel issue in Spring 1989