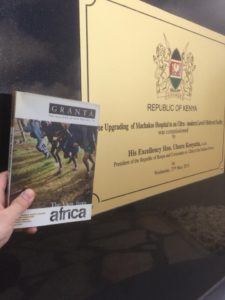 This Granta issue about Africa was bought in Europe, brought to Asia, and partially read in Africa.

After all, I didn’t just get a nail cutter (however used) when I visited the capital of Kenya.

I also got a whole nail care set — nail file, tweezers, etc. — all stored in a translucent purple plastic case that is the envy of every metrosexual from Manila to Mombasa.

The whole package was given gratis sine amore by Atty. Liszy Comafay, who initially lent me her nail cutting equipment but eventually decided to let it all go. Apparently, Atty. Liszy (who, by the way, gained a lot of African male fans) no longer wanted it back after I used it.

She never wanted to have her nail care equipment (such as it was) fall into the wrong hands in the first place.

As a result, nowadays, whenever I trim my nails with her special clipper, I will always remember Nairobi with fondness while  gazing wistfully at my cuticles.

The Philippine delegates to the Global Road Safety Leadership Conference 2018 take a groupie for the last time Nairobi, Kenya.:) I will miss you all! Thanks for the fun. @scribblerjack @RochBartolo #rGRSLC2018 pic.twitter.com/SXleK389tr

But don’t get me wrong.

I didn’t go to Africa just to trim my nails, let alone get a free nail cutter.

I went to Kenya — my first visit to Africa — to attend a Global Road Safety Course that was organized by the International Federation of Red Cross and Red Crescent Societies and the Johns Hopkins Bloomberg School of Public Health and bankrolled by Bloomberg Philantrophies.

Of the 63 participants in 23 countries, I was one of two who beat deadlines for a living (the other being Omar Jacob from Fortaleza in Brazil, who also worked in communications for the Bloomberg Group).

Meanwhile, I was the only one who barely had an idea as to what road safety was all about.

This fact hit hard on the second day when one of the lecturers approached me and asked about road safety data in my home country.

Unimpressed by my reply, he retorted, pointblank: “So what are you doing here?”

“I am going to write about the Philippine situation,” I said lamely, knowing all the while that I could do all that — and perhaps even more — without leaving Quezon City.

Good thing my ignorance was somewhat mitigated by fellow Filipinos — Attorneys Liszy and Francis Panoncillo and Roch Bartolay — who all gave me updates on the, uhm, Philippine situation. 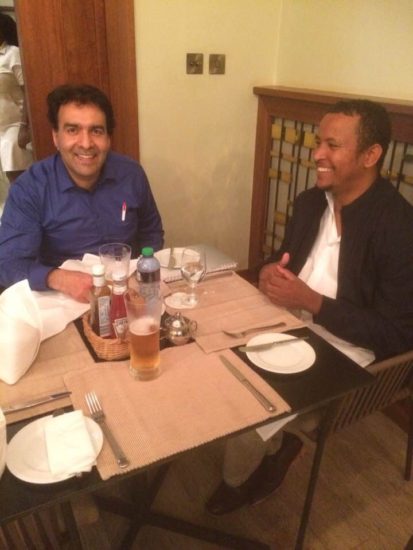 As of this writing, I’ve got two different drafts — all unfinished, unfortunately — about road safety. I also already have interviews and notes for a third piece and I intend to work on them as soon as I get over jet lag and what is called in Portuguese as saudade (loosely translated as the blues).

I had so much fun in Nairobi and I’m sorely missing it (especially now that I’m back home, manacled to the old ball and chain that corporate slaves such as myself fondly call the — cough, cough — office).

While keeping my jet lag in check, I’ve also come to realize that all the hours I spent at the bar during the course — mainly with the Filipino, Thai, Chinese, and Ethiopian delegations — was time well spent.

This was even though half of my life savings went to pay for the bar tab.

But then again, that’s another story best told in another gathering, preferably in Bangkok, where nearly all of us will meet again later this year, if things go as planned. Isn’t that right, Jarunee?

Jorge (Bogota), Me, Eric (Nairobi), Fabrizio (New York), Claire (Kampala), and Raph (Accra) pose for a photo after we win the People’s Choice Awards during #rGRSLC2018. Not in photo is Lemmy (Dodoma). pic.twitter.com/LA3RFa1yDW

FROM THE PEOPLE’S CHOICE AWARD DEPT. At the end of the course, all participants (which were split into groups) were tasked to formulate a road safety campaign using data from several countries. The groups were then tasked to make a pitch to judges and fellow participants. Those whose campaigns raised the most money — fake, unfortunately — from their fellow participants (who were disallowed to give money to their own groups) won the People’s Choice Award, one of two awards given in the competition. I’m mentioning all this to say that the group I belonged to, Group 7, won that award. I wish to thank my group members: Fabrizio Prati, Claire Biribawa, Lemmy Shumbusho, Raphael Awuah, Eric Juma, and, last but not least, Jorge Rodriguez. Guys, I have to say that I thoroughly enjoyed myself. Never has being locked up for two weeks inside a hotel cum fortress been so much fun. And, finally, to Jorge: Thanks for trying your best to help me touch up on my Spanish by giving me a book about road safety that you wrote — in Spanish, obviously. I hope to read that soon. Gracias, amigo.