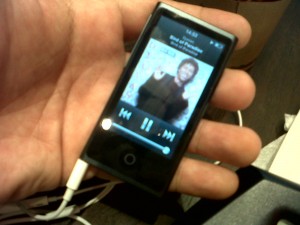 “People acquire a new item, feel more satisfied after an initial boost, then rapidly revert to their baseline of well-being. So, when you “upgrade,” you feel a boost of satisfaction with changes in technology. But then you get used to it and start hunting for the new new thing.”

What’s smaller than a credit card, thinner than a chocolate bar, and more fragile than a set of Chinese-made disposable electronic trinkets from CD-R King?

A fridge magnet from a frenemy? Nope. A spoiled nephew’s failed science project? Nein. A slice of left over ham from last month? Nyet.

With a capacity of 16 gigabytes, it’s enough to store more than three days worth of music (as long as each piece is roughly five minutes long and has a bitrate of 320 kbps) and a couple of hours of video files which, by the way, you can watch on its tiny screen (small enough to discourage onlookers from taking a peek).

But besides being a dirt and smudge magnet, what enhancements does this newest iPod offer compared to its previous iterations? Very few, save for the earphones that come with it.

The earphones are such a joy to use. Once you pump up the volume, it delivers just the right amount of crisp sound, allowing for enhanced listening pleasure.

Unfortunately, no one buys the iPod for the earphones. You choose to get Apple’s favorite music player because of—for lack of better reasons—form and function. Not only is it useful in playing music, videos, and yes, even music videos, it is also nice to look at and hold.

And that’s when the trouble begins.

This is because the seventh generation iPod Nano is just like a drill sergeant during military training. If you don’t give it your full attention, you’re more likely going to make the wrong moves.

No thanks to its size and weight, the regular user—say, myself—is more than likely to press the pause button—located between the up and down volume buttons—whenever adjusting sound levels.

Moreover, when you want to repeat a song or skip to the next, you might accidentally press the volume slider on the screen—and as a result, deprive yourself of music or damage your eardrums—because the slider is just below the rewind and fast forward buttons.

All these, of course, could be avoided if Apple could have retained its original clickwheel on all iPods.

After all, you can’t swipe everything.

You can swipe an iPhone with your fingers and do the same with your credit card at the nearest terminal. You can even take a swipe at your frenemies for giving useless gifts.

But not so with a music player, iPod or otherwise. Why?

Swiping stuff on a screen just to listen to good Filipino music (i.e., Yoyoy Villame’s Si Filemon)—as required by this newest iPod—involves a production so grand you’ll be distracted from enjoying the music. How come? You have to take the iPod out of your pocket, press the Home button, and then make sure your fingers press either rewind or fast-forward.

In older clickwheel-enabled iPods, all you had to do to repeat or skip a song was to press either the rewind or fast-forward buttons, an action that can be done even if the iPod was in your pocket.

But then again, those days are long gone. Like the clickwheel, these will no longer be resurrected, thanks to Apple and its drive to make and sell what it considers as cutting-edge products.