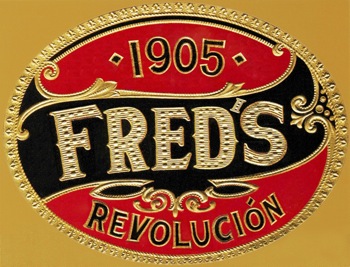 Photo by Fred's Revolucion, taken from their Facebook Page

I was sitting on the bar, waiting for Red Constantino to come back and play loquacious host on the other side of the counter when all of a sudden, a man barged in with the urgency of a spy on a secret mission. [See: Red Constantino]
“I think I forgot my wife,” he said, pausing for effect.
It wasn’t exactly something I was expecting to hear, especially not at ten in the evening after I’ve had my third beer.
I was half-expecting someone to ask me whether I belonged to Manila’s Finest because I was either too noisy, too rude, or too inebriated.
But to listen to someone say that he had forgotten his spouse in a bar — that nearly shook off all the good spirits I had imbibed that night.
I understood the guy’s situation somewhat.

Fred's Fish and chips (Photo by Vincent Go as shown in Fred's Facebook Page. Is his middle name Van? I have no idea.)

I had lost things too throughout the years: a Montblanc Meisterstuck 146 fountain pen which I bought really cheap in a Manila antique shop, a length of white cord that my late Lola Vita told me to hang on to upon arrival from a vacation in Canada (I didn’t know what it was for but I never heard the end of it), and the occasional expensive, push-button umbrella in taxicabs.
I haven’t lost my wife in a bar however. (She got lost somewhere else but that’s another story.)
Now here was this guy, standing three feet away from me, telling everyone within earshot that he had forgotten his wife in the very same bar where I was.
He then hunched over the counter and pointed to a black bag on the floor.
The guy — obviously a professional photographer — had left his camera behind.
As if on cue, Red showed up behind the bar and handed him his equipment.
After they exchanged pleasantries, Red returned to his other drunken guest without bothering to bring up spouses unaccounted for. 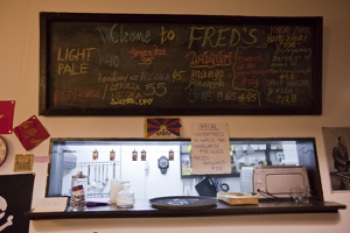 All throughout the night, Red and I both drank and talked shop with hardly anyone volunteering to explain why the photographer had forgotten his camera, which was so vital to his profession and livelihood.
We didn’t bother with that at all.
But then again, come to think of it, the photographer’s senior moment could be the result of the food, the beer, or the bar itself. Who knows? It might even be the combination of all three.
If true, then the bar’s proprietors could never be happier.
Because this is exactly the feel that they want the bar to have. They want it to be a home, especially for sincere drinkers.
The bar’s name?
Fred’s Place, the newest establishment in Cubao X that aims to be a tavern, a bar, and a place where people can get their hair — and their guard — down. 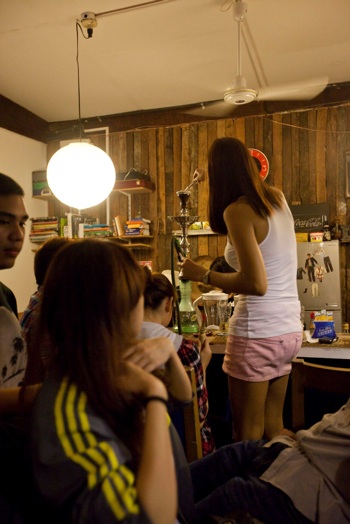 Besides seeking to recreate a homey, cozy atmosphere, Fred’s seeks to have its own set of habitues, whether loners, social butterflies, or regular barflies.
“You can come here and you know all the assholes — just don’t pet the pets,” said Red Constantino, who’s part of Fred’s Revolucion, the company that runs the bar. No one among the owners are named Fred though.
Although menu items may be added in the future, a few things are already definite: Fred’s will serve cold beer, a few classic cocktails (daquiri, margarita, manhattan, dry martini), and brewed coffee from the provinces.
The first batch of brewed coffee will be from Jolo, said Regina Abuyuan, one of the proprietors. [See: Regina Abuyuan]
As to the food, Derek Soriano, the chef, has promised not to cook for health but for taste.
Feedback has been positive so far.
Just a week ago, one dish impressed a guest so much that he called the chef Fred.
No one complained.
After all, everyone was home.

(N.B. In a recent email sent to me by Gina, she listed a few items that may be served, depending on availability. These are:
1) Smoked Blood Sausage with sticky rice and Tomato Salsa. Traditional Tuguegarao smoked Dinuguan, topped with Chicharong Isaw — crunchy and salty isaw bits.
2) Kuala Tripa. Fred’s answer to Chicharong Bulaklak. Deep fried slices of tripe sprinkled with chili.
3) Smoked Porkchop with Mashed Potatoes and Gravy.
4) Hum-beer. Traditional Cebu Humba simmered for a day in Coors beer and spices. Download Fred’s menu here.)

From the Usual Disclaimers Apply Dept. No financial nor promotional consideration was offered nor received for a favorable review of Fred’s place. The proprietors are my friends though.