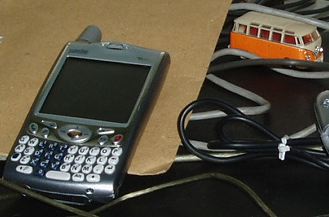 SMARTPHONES can be useful.
Especially if a summer downpour catches you unawares, leaving your underpants wet and forcing you to seek refuge in a fastfood outlet whose airconditioning is slightly above the temperature needed to produce ice.
Which is exactly what happened to me Tuesday night in Quezon City on the way home.
Immediately after getting off a jeep at Philcoa, I had nowhere to go. A small body of dirty water had formed right in the middle of a tricycle terminal where the last leg of my journey home usually begins. In the meantime, the rain gave no indication that it was letting up anytime soon: it poured continuously from the moment the train I was on pulled into the Quezon Avenue station until my untimely arrival via jeep at Philcoa.
Although I could take an alternative route to the apartment from Philcoa, it involved a far too complex process to be appreciated by greedy, predatory cabdrivers intent on making a quick buck or two from desperate commuters such as myself.
Besides convincing a cabdriver that the road home was free from flood, traffic, zealous policemen, and criminals, I was expected to fork out extra for his kindness, that is, if he actually decided to take me.
Unfortunately, since I was already drenched and stranded, my extra reserve of goodwill was in dire need of replenishment. It absolutely dried up when another driver told me that the leg room of his cab’s front passenger area was inundated with rainwater. It was drier than the humor of columnist Conrado de Quiros.
Incensed, I ran for cover, which was an exercise in futility—if there was one—since I was already gearing up to become a finalist for a wet t-shirt contest: the fat Filipino male version. I then whipped out my smartphone, and continuously pressed just one single button to dial a pre-programmed number: my wife’s. Upon being connected, I told her that I would be unable to pick her up immediately because I couldn’t get to Charing—a 1994 midnight blue Toyota sedan we inherited from her parents—who was parked at home. (As it turned out, my wife was given a lift by a very close friend who had an errand to run. Thanks, Barry. And Maya too for her thoughtfulness.)
In the meantime, since I was already stranded in the area, I told my wife that I might as well have dinner at a nearby fastfood outlet where I proceeded to freeze my balls off, as earlier mentioned.
After I ate a hasty supper of chicken and spaghetti, I once more unsheated my underutilized smartphone—a Treo 650. With two hands, I began to do the finger mambo on the unit’s qwerty keyboard using the Documents to Go application.
As I whiled the storm away, I eventually produced a short but nevertheless workable draft of a piece whose parts were enhanced to produce the blog entry which you are reading now.
Moral of the story: it pays to have a smartphone handy especially if you’re going to be stranded in a cold fastfood restaurant—it keeps your mind off from your freezing balls.
———————
FROM THE ENGLISH USAGE DEPT. Re: phrase “catches you unawares.” Is it catches you unawares or unaware?